Built on an ancient site The old church of All Saints, the remains of which now house the Heritage Centre, was on an ancient site at the bottom of Hastings Hill, previously named Church Hill.

Roman and Saxon remains have been found nearby and it is believed that a Christian Church stood here in Saxon times. We know from the Domesday Book that Churchill, Sarsden and Lyneham were Saxon Manors and it is probable that all three had Churches prior to 1066.

By 1170 the de Noer family were lords of the Manor of Churchill and the church was probably constructed by them in the early fourteenth century. A memorial to them is in the Heritage Centre.

The church was then at the centre of the village, traces of which can be clearly seen in the field by the churchyard. Many of the houses in this part of the village were destroyed by a disastrous fire in 1684. Around 1700, during the time the Walter family were lords of the manor of Sarsden, the tower was rebuilt and later the chancel was restored. The date 1702 was inscribed high on the east wall where it can still be seen. During recent repair work the vault of the Walter family, which had been under the south aisle, was exposed. It contained a number of lead coffins, some bearing an engraved letter W.

By the end of the 18th. century the old church was in a bad state of repair and in 1825 James Haughton Langston, who then owned the Sarsden estate and most of Churchill, obtained permission to pull down the old church and build a new one higher up the hill in what was, by then, the new centre of the village. The new church was built entirely at his expense and was designed by James Plowman using ideas from a number of Oxford buildings. The old graveyard, however, remains in use.

The new All Saints was consecrated in 1827. Its tower is a two-thirds size replica of that of Magdalen College Oxford and is a landmark that can be seen for miles around. There is a peal of eight bells and an unusual feature is the external staircase leading up to the bellringers’ chamber. The church survived a potentially disastrous fire in 2007 and is now fully restored and regularly used for church services, concerts and other community activities.

The poet John Betjeman admired the church tower – “a beautiful landmark” – but the architectural historian Nikolaus Pevsner had little good to say of the nearby fountain on the village green, a memorial to James Haughton Langston provided by his daughter Julia, Duchess of Ducie. Pevsner described it as “memorably ugly”. Not everybody might agree. 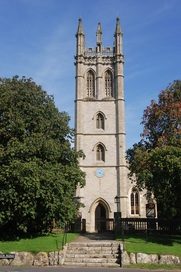 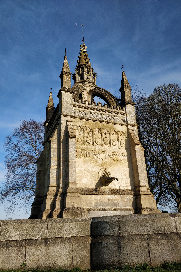 All Saints Church and Memorial Fountain